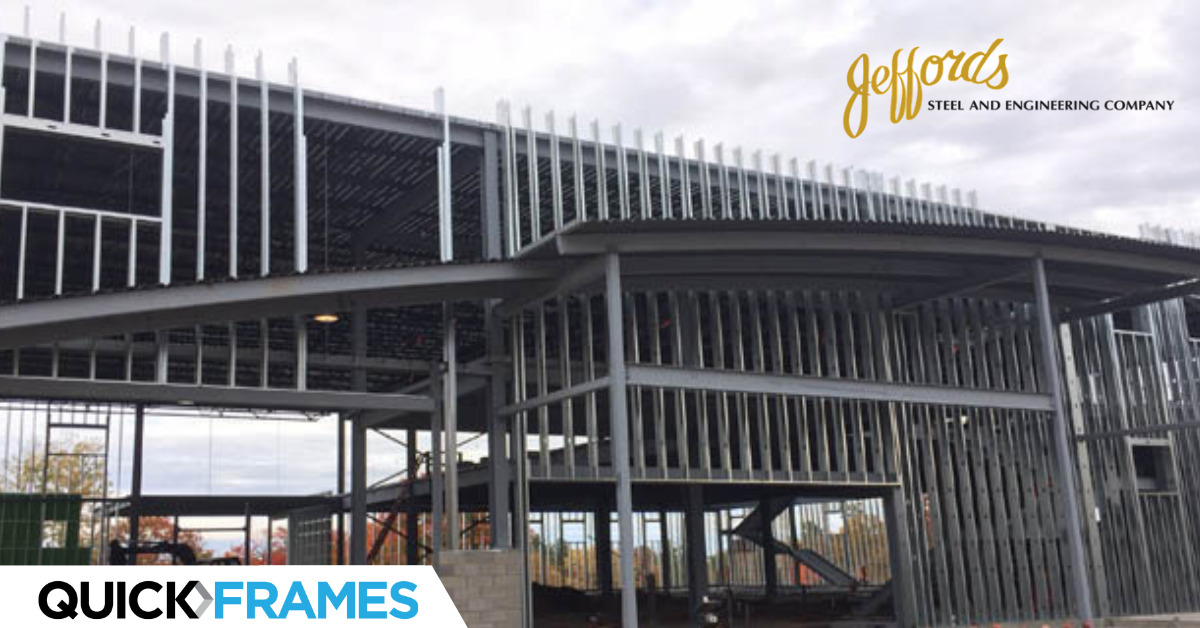 “If the location information can’t be provided, why doesn’t everyone just use QuickFrames? They can be moved, expanded and changed. It’s like magic.”

Mark Dutton, Project Manager with Jeffords Steel, was tired of the typical way steel fabricators were forced to handle structural rooftop unit support frames for new buildings. They had to wait until the last minute for mechanical contractors to provide the necessary information about where the openings would be. But this information was always last-minute and put them, as the fabricator, under the gun.

On a particular job, Mark asked the mechanical contractor to provide the locations and specifications of the frames. The contractor had asked his team to build angle iron frames, as the erectors wanted 4×4 frames that were already built and could be dropped in. But in order for them to do that, they needed the skylight installer and the mechanical folks to provide the exact locations off the gridlines – and neither could.

So they were in a situation where the erector couldn’t drop frames in before the decking went down, meaning they’d have to weld frames in from underneath. Nobody wanted to go this route, as the expenses – and hassles – would be much greater.

Mark has used QuickFrames’ adjustable roof frames before and keeps them in stock for emergency situations like this, so he offered them to the General Contractor. The GC agreed to give them a shot, so Mark showed his team how easy the frames were to install. He demonstrated how they could slide a frame apart to fit it in the duct flute, adjust as needed and then bolt it in. He told the team how they could pick one and get within one or two inches of the exact location in which they needed it because of the adjustability. They were amazed.

“With QuickFrames’ ability to be adjusted last-minute, we finally have enough room to move things around when needed,” he said. “They make this whole process easier for all of us.”

After seeing the success, Mark got creative. He asked the GC if he might provide a credit for the installation and shop hours that would have been used if they had fabricated angle frames. The GC agreed, and then told each of the associated parties (mechanical team, skylight installer and everyone else) that they were responsible for installing their own frames in the right locations. They were told they could put the frames in any time, when the deck is going on, afterward or when they put the curb in.

The erector didn’t have to install the frames, and Mark didn’t have to use any of his shop time to fabricate frames at the last minute. Most importantly of all, no one incurred the excessive expense of welding in frames from under the deck.

“I’m pushing for this process on other jobs,” said Mark. “If the location information can’t be provided, why doesn’t everyone just use QuickFrames? They can be moved, expanded and changed. It’s like magic.”

The same situation just came up on another project that Jeffords Steel is erecting, in which the design team had not shown frames for all the roof drains and the roof access hatch door. This time, they didn’t panic. Instead, they simply provided the GC with QuickFrames’ information, and they ordered roof frames directly. The GC was then able to take care of the missing items and install the frames on their own. This process allowed the GC to provide missing items, meet specifications and reduced the costs that the design team and owners had to absorb.

QuickFrames is a great product to use for the equipment curbs that we have on the job. They are easy to assemble, very versatile in sizing for whatever opening is needed. Attachment to the structure

I’ve had great service from QuickFrames. They have been able to help get me out of a pinch on a couple occasions. The frames are easy to install and are an exceptional choice for renovation

QuickFrames has exceeded my expectations. My experience starts with their representative Chase. He is great to work with and extremely responsive. Most importantly he does what he says he will do. QF is fantastic with

Easy to install frames and client was happy that no welding was involved.

Excellent sales customer service! The double check of my product selection by QF’s engineering team was an unexpected service as well. The quality of the product was great and it was easily installed.

QuickFrames is just that, quick, they are very helpful and know what they are doing, I have used them on many projects this past year and have always had a great experience.

We have installed hundreds of roof curbs and QuickFrames are by far the best support framing we have ever used. We had a project where welding support framing was not an option, our structural engineer

Quick, knowledgeable staff, product installed easily and was of superior quality. Would definitely use again.